The first person I met at the Avantpay |19 conference was the always smiling, Crypto Curator, Paul McNeal. I had no idea Paul was the host of a crypto news show, but after talking to him, I knew he had the chops and would make a great guest for LAB Radio.

Paul’s path into crypto took a circuitous route to say the least. Like many, he was able to leverage a previous skillset to help him land where he is today. Initially Paul heard about Bitcoin from the Bitcoin Knowledge podcast by  Trace Mayer.

This officially made him the “go-to” Bitcoin guy when the monthly Chamber of Commerce Tech Committee Meeting took place in Loudoun County, VA. Back in 2012 it was tough to make a case for its uses, but Paul always spoke about it in a positive light and defended it against its critics. However, the Chamber would not put on a Bitcoin event.

Paul’s background in the military has helped him in many ways. He was an ROTC Army member in High School and then went into the Navy. He was on a submarine and was doing IT work, which helped him transition after leaving the military. Also, Paul picked up lots of real world skills which was surprising to me. The story of how he actually joined the Navy is quite interesting and worth a listen (@14:02)

At this point we transition into the Avantpay19 Conference. Initially he heard about the conference because he knows Joshua and Peter, the organizers and founders of the event. It’s not every day you see Legislators, Bankers, Payments people, Cannabis Entrepreneurs and Crypto enthusiasts all in one space talking about the same thing. Since this conference is truly one-of-a-kind, I asked Paul for his take on the event and his other thoughts:

Finally, we run through the Crypto Curators biggest fears in the industry, as well as what he would change if he had a magic wand. 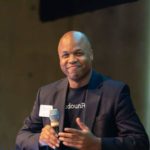